One clear indicator of the depth, strength and quality of a senior leadership team is their ability to have – and stay in – tough conversations in ways that build and not bruise the team fabric.

Pause for a moment to consider your own leadership team… What happens when there is a hint of a contentious issue? Is it surfaced and addressed? Acknowledged? Quietly pushed back underground? What’s the long-term effect of what’s not said and remains unresolved?

The impact of disconnect in a senior leadership team – even if it’s isolated to between two people – will be experienced across the organisation. Before you shrug and decide it’s just a small thing, and only within the leadership team anyway, know that you are probably wrong! If people’s bosses (or their boss’s bosses etc) can’t get along, it’s going to be hard for them, the direct reports, to get along. Silos are entrenched. Lack of cooperation is unofficially condoned.

A team leader has two people not getting on well in her team, and it’s negatively impacting the team dynamic. She knows it’s her responsibility to support her two people to resolve their differences, and yet when she sees that at the executive level it’s okay not to get along… How motivated will she be to tackle a Fearless Conversation in her team?

What’s the alternative? Fearless Conversations allow constant fine tuning of shared vision, lived values, team protocols, and the essence of what we stand for as leaders and a leadership team.

Earlier this month I worked with a leadership team who were able to have a Fearless Conversation about what leadership team behaviours increase and decrease cynicism across the organisation. It was a long and at times uncomfortable conversation. Specific examples were offered, perspectives considered, everyone spoke, and everyone listened. They stayed in the conversation until it was finished.

Later that day they developed three ‘rules of engagement’, one of which was ‘Open and Brave Conversations’.  Here’s what that meant for them: 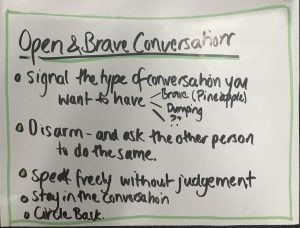 It’s not unusual for teams to develop these types of protocols. I know this team can have these conversations because I have seen them in action. I also know what’s at stake for them to provide the leadership their rapidly growing organisation needs. I have experienced the level of commitment they have to each other and the business to maintain open and brave conversations.

What does ‘open and brave’ look like in your leadership team now? What could be possible? What will you do today to take you one step closer?